dawnsears.com - It has been the case for years. Will this ever be addressed?
You can export as MP3 where long scenes will eventually get out of sync with the audio, or you can use RAW/Speech/ADPCM where the audio will break at random points.
I'm in the fifth year of what could be the biggest Animate/Flash project ever. I have about 3 hours of footage with hundreds of scenes and thousands of sound effects + sounds. One option might be to redo all the audio work in another app, but: 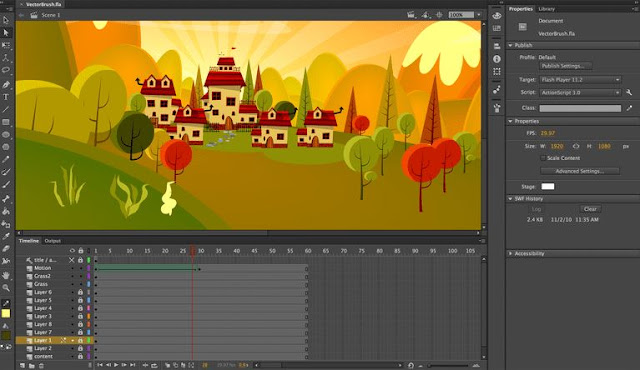 Please, for the love of God, fix this long-standing problem. Give us some way to export long scenes with sound that stays in sync and doesn't crackle. If the videos using the MP3 export option are synced, that alone will fix the problem.
If anyone at Adobe finally wants to fix this problem, contact them and I can send several .FLA files when this happens 100% of the time.

I would suggest exporting SWF with the highest quality RAW audio and then using SWIVEL to convert to MP4.
If you are not using advanced layers this will work fine.
Other than that, export WAV and PNG and compile the video in Premiere.
In Premiere, right-click on the audio track, choose Speed/Duration... and enter the length of the video to match the length of the video. Everything will be in sync.
Nick - Character and Animator designer, Flash user since 1998
Team member Flanimate Power Tools - Character Animation Accessories - Flash-powertools dot com

Unfortunately, Swivel doesn't work, and never accepts SWF, I think because of the advanced layers you mentioned.

The second suggestion is the one I haven't tried yet, mainly because it would take a long time (and it should be MP3 instead of WAV, as WAV files include the crunch). Not just because of the time it takes to export large sequences, but because of the hundreds of files and hundreds of thousands of frames involved. It's crazy that the onus is on the user to fix it in a cartoon designed app.

It only works 100% of the time correctly as a SWF file. However, since most people won't export SWF files as an end result (for obvious reasons), it's unreasonable to expect clients to do all that extra fieldwork for formats that are still widely supported.

I totally agree with your concerns. The animation has been in pretty bad shape for a long time.

I know about the squeaking, but I still have to figure out when and how it happens. I've heard it on some computers when using ADPCM in SWF. In my current setup, I don't experience any squeaks in CS6 and I mostly use the RAW/SWIVEL combination to produce high quality videos. But again, I only use CS6 and publish it as AS2 Flash Player 11 SWF.

If these advanced layers aren't necessary for your production, try opening a file in CS6 and changing it to AS2. It might be worth a try. If you need the advanced layers, you're stuck with the other option.

I'm wondering if the rattle is somehow related to the hardware and not in the actual WAV, but how the sound card plays it. Try exporting WAV and then converting it to MP3 somewhere else just for testing.

Or it may depend on the audio sources. I always make sure to feed the Flash 44100Hz with 16-bit audio. If the sources are 48000Hz, maybe converting to 44kHz while exporting will cause cracking...